Classes started on Tuesday.  Back to work!  Well, it was a nice break, but I have a good slate of classes and release time to work on the writing program in biology.  I got some great news Wednesday, as on of my papers was accepted into Journal of Thermal Biology.  It’s on temperature regulation in the western cicada killer, and it comes out of the first trip to Big Bend.

Thursday I took the Lil Egg car to have the front end aligned, since it had had a big vibration after I rotated the tires.  They said it needed new shocks, struts and tires in addition to the alignment, and they’d do it for $760.  Except for the tires, because they don’t sell tires.  After I placed my head back on my neck, I told them I’d think about it.  I went to the auto parts store and bought the shocks and struts for exactly half the cost of the estimate.  I’ve replaced shocks myself before.  Struts may be a challenge.

Friday the big storm came in.  Steadily falling temperatures changed rain to freezing rain.  I went out to Lowell’s, using the truck to deliver some goods, such as the choice hollow log I found in the brush dump.  I stopped in La Grange and bought a couple dozen minnows.  On the way to Lowell’s I passed a small hawk in a tree by the side of the road.  I turned around and went back.  Incredibly, it didn’t spook when I stopped.

Too bad the light was so poor.  You can see the ice on its tail and wing tips.

Lowell and I took the kerosene heater into the floating dock, which kept things comfortable.  We were trying to catch the first fish of 2007, hopefully a crappie.  Unfortunately, that fish was not cooperating.  We didn’t get a bite.  Mice had chewed through my old creel that I kept down there to hold some baitfishing tackle.  In fact, mice were living under the little propane heater Lowell had on a shelf.  We thought they were a little disappointed that we had switched to kerosene.

We gave the fish a rest and looked at the 159 pictures of the sky that Lowell’s trail camera took after it was blown over by the wind, then went to lunch in Ewing.  We fished again when we returned, but the first fish of 2007 is going to make us wait.  The freezing rain came and went, sometimes alternating with sleet.  I had to scrape the windshield when we went to lunch, before we came back, when I left, and once on the way home.  The roads were good, though, which is the important thing.

Birds are hitting the feeders hard now.  This is as good a shot of a mourning dove as I’ve ever gotten.

Saturday we stayed home, except for the ladies going to Quincy on a brief shopping expedition.  We timed it just right.  While they were at the mall, I was at the women’s basketball game.  We won in a very exciting game.   I couldn’t stay for the men’s game, where we faced a higher ranked team.  I recorded it on the local channel that night, and watched it Sunday morning–except for the last two minutes, which were cut off!  I went out and got the paper and found we had won by two points in overtime.  Miraculously, I was surfing the TV later in the day, and caught the end of the game, which they reran.

I forgot to mention that while we were on our way to Quincy, a guy coming the other way had his trailer jackknife while crossing a bridge.  It was impressively scary, as the trailer bounced around, turned sideways, and performed antics that no trailer should do.  Stacey called 911.

We got home before the nasty stuff hit, another round of freezing rain.  Everything outside was covered in a layer of ice.  There was a little crust over some lighter stuff, so you could kick your heel through it and get a little traction.  That didn’t work for the dogs, though.  They were slipping and sliding.

I was sitting at the table when a sharp-shinned hawk landed on our bird feeder.  It was just a juvenile, but it took off while my hand was reaching for the camera.

Sunday church was cancelled, so we all stayed at home in the morning.  Later we went grocery shopping.  I bought a sidewalk ice scraper, which I used to clear the sidewalks, driveway, and dog kennel.

Monday I had off, Stacey had to go to work, while Savannah had a snow day.  The irony is that it was supposed to be a make-up day for an earlier snow day.   We made one run of errands around town, but mostly worked at home.  At least the birds were busy at the feeders. 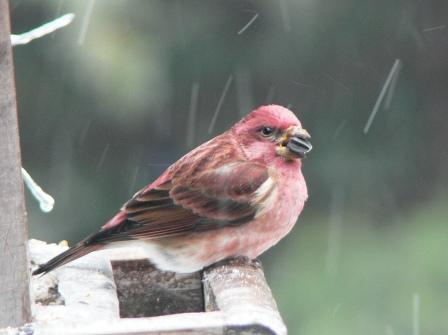 Purple finch in the snow.

It snowed lightly all day, but the freezing rain of yesterday left its remains on this dogwood tree, leaving me the opportunity for some artsy shots.