We got elephant blaster showers at the KOA, then hit the road.  It was a fine, cool morning, with lots of cloud cover.  We crossed the flats of the Texas pan handle west through El Paso to New Mexico.  I’m sorry, but El Paso smells bad.  We crossed the southern part of New Mexico without incident, except for stopping at a WalMart for supplies.  It was then up a windy, narrow road to Portal, Arizona and the <ST1

laceType>.  We camped at the Sunny Flats campground in the National Forest.  This is the first place we’ve stayed without full hook-ups, so we conserved water and electricity.  At the bottom of the valley, we are in thick woods with pines, oaks and sycamores, but the tops of the peaks that surround us are sheer, rocky crags.  The scenery is unbelievable.  We drove up to the place where Jon did his doctoral work on the western cicada killer back in the 80s, but there were none present.  In the afternoon we hiked up the South Fork of Cave Creek, which is known for it’s wildlife.  Right away, we saw the biggest gopher snake I’ve ever seen, followed shortly by a Coues whitetail deer buck.  We hiked up to a saddle that had breathtaking views.  Apparently, illegal immigrants are using this trail at night to sneak into the US.  They’ve left trash behind on some areas of the trail.  We saw lots of wildlife, including a painted redstart, more cicadas, and lots of butterflies.  My legs got sunburned, and whatever rash I have spread to the front of my shins.  Long pants from now on!  When we returned, I cooked a huge batch of spaghetti.  We scarfed.  In the evening, it rained, which cooled things down nicely.  Jon and I took a night hike and drive to look for wildlife, but not much appeared. 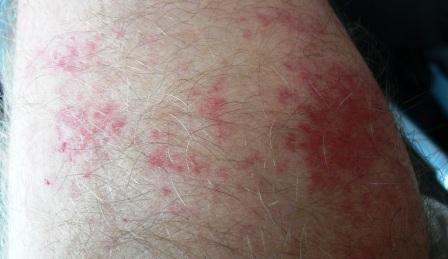 Stacey says I’m not allowed to bring home infectious diseases, but this was caused by contact with plants unknown.

Pretty little lizard, as yet unidentified, like many species here that await access to my reference material.

Coues whitetail deer, about the size of a large dog. 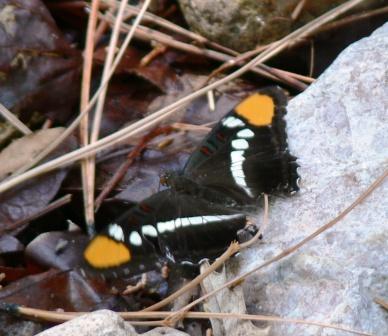 Cliff face over our campground.

I never get tired of whiptails… 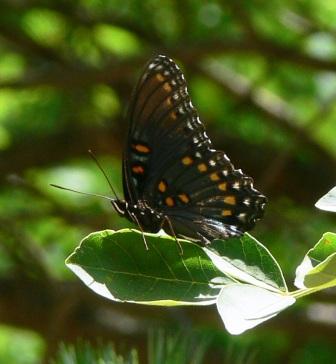 We awoke to 60 degree air: it was wonderful.  After breakfast I took a short hike down a trail.  Saw lots of birds, including the highly prized elegant trogon.  Upon my return, it was calling fairly close to camp, so we all went out to look for it.  On the way, we ran into a local naturalist who, learning we were scientists, showed us where the nest was.  I went back to camp and got a chair and tripod, then sat down across the trail from the dead sycamore with my camera aimed at a hole 25 feet up.  45 minutes passed, but no trogon appeared.  I gave up and returned to camp.  Meanwhile, Jon had been up south fork and been face to face with two trogons.  We took Chuck’s truck and drove up a narrow, windy gravel road and over the pass.  We didn’t find any cicada killers again.  We returned to camp, had lunch, and I took a nap.  I hiked back up south fork again to look for the other trogon nest.  I found the spot the guy described, but didn’t see the birds.  Chuck and I went to a scenic overlook that was pretty spectacular.  There was a yucca in bloom there that had two huge tarantula hawks on it, so naturally we collected them.  We went back to the trogon nest again, but they weren’t home.  We saw some old explosive depots built into the rock.  Must be leftovers from the old mining days.

Three agaves and a view.

Yet another red-spotted purple.

The inside of this would make the most cruel solitary confinement.

My best elegant trogon picture, and none too good at that.

While Chuck hitched up to the trailer, Jon and I went up to south fork, where two male trogons were have a territorial dispute.  It was fairly early, with no sunshine in the canyon yet, so the pics didn’t turn out that well, even though the birds were cooperative.  We all convoyed out and headed west again, stopping at an RV park in Willcox, Arizona (full hook-ups and wi-fi again!).  We drove out to a wilderness area near the Willcox Playa, a huge lake, mostly dry right now.  It’s probably best known for its sandhill cranes, which aren’t there in the summer, of course.  It was hot and very dry.  The area has been under a drought for about two years.  Quite a contrast to Big Bend and even the Chiricahuas.  Though the tamarisk was in bloom, there were hardly any insects visiting it.  Most of the other vegetation was dead or dry.  I did spot one cicada killer.  We chased it around, but didn’t catch it, and it disappeared.  We looked long and hard for that one, or any others, but didn’t find any.  There were only about 3 cicadas calling in the whole place.  Chuck and I had lunch in historic (= tourist trap) downtown Willcox at a place called Rodney’s.  I had the chile verde burrito plate, and it was delicious.  We drove to Cochise to look for wasps, but didn’t see any likely habitat.  I got a load of laundry done and checked my email. 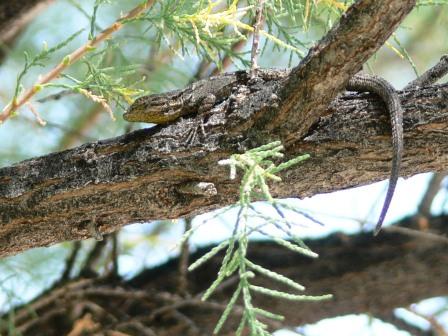 A tree lizard who’s got it made in the shade. 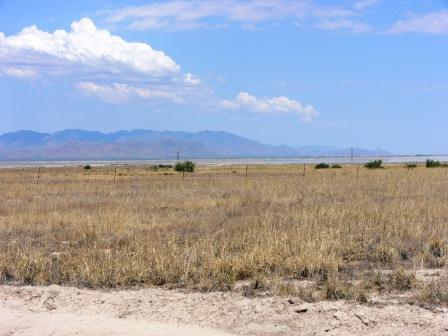