I worked on the rental house some more.  The medicine cabinet was all rusty.  I took it out and looked for a replacement online.  There was nothing even close to the right size.  So I took apart the old one, sanded, primed, and painted it.  I reassembled and reinstalled it, good as new.  Guess I should open a body shop.

Tuesday was probably the hottest day of the year.  It was supposed to make 100 degrees.  I don’t know if it did.  (0ur thermometer said 105, but it reads high).  So naturally, I did some chainsawing and logging.  Not for very long.

Wednesday afternoon I went into the office to work for awhile, then to book club.

Thursday I had the “beginning of the semester” meetings.  There was good news.  All numbers for QU are UP.  Something like 46% for total enrollment.  I am amazed, and very happy.  The afternoon session was all about our upcoming accreditation visit.  Dull, but very important.  Meanwhile, Savannah was in my office reading in the morning, and in the mall shopping in the afternoon.  I picked her up just in time to go to the theater and see the latest Harry Potter.  It was great, and as faithful to the book as it could be in the limited time.  We ran back to campus just in time for the faculty/staff picnic.  Stacey met us there.  We won a T-shirt in the drawing.  The deposit was made for the Galapagos trip, so it looks like I’m going.

This sunflower came up voluntarily in the back yard, no doubt a leftover from the bird feeder.

The official common names for the North American cicada killers that I proposed almost a year ago finally were approved and added to the online database.

Go to http://www.entsoc.org/Pubs/Common_Names/search.asp and search for the genus Sphecius.

I’m not enough of a taxonomist to ever name a new species, so this is as close as I’m likely to ever get!

Friday we had a division meeting in the morning, free lunch, and a general assembly meeting in the afternoon.  Saturday morning I had to go in to meet my FYE class.  It was fairly casual, and we had some good discussion.  I had brought along a live male cicada killer, which got their attention, I think.  I went downtown to the farmers’ market and bought a watermelon and a couple of onions.  I saw some butterflies nectaring on the ornamental flowers in the park there, so I ran back to the car.  I thought I’d never get a photo of the Cloudless Sulfur because their usually 20 feet high and moving fast.  These were fairly cooperative.

I met Stacey for lunch, and we caught up on the day’s news.  She went back to class, and I went to the pet store and picked up a couple of mice.  I was talking to Ron while driving down Broadway and the watermelon rolled back and squished the mouse box.  It ripped open and a white mouse started poking his head out.  I related these amusing events to Ron, then pulled over and straightened things out.  The mice made it home intact, where the snakes thought them very tasty. 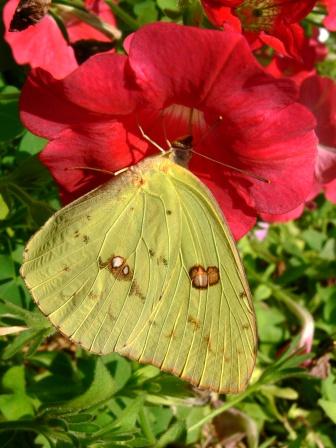 I suppose the lack of spots on the male (left) makes them the Cloudless Sulfur.  Female at right.

Stacey brought home Chinese food for dinner.  Savannah and I went out to help bring in the groceries.  I was trying to let Stacey in, so I flicked the screen door open a bit more and gave a little push to the front door.  The screen door sprung back immediately and hit me on the eyebrow.  I don’t think I was ever hit like that in 20 years of karate.  I got a vertical cut, which Savannah says will make a nice dueling scar someday.  Yeah, dueling with an inanimate object.  It must have affected my brain because after dinner I ate my fortune cookie with the fortune still in it.  Though fiber in the diet is good, I eventually get all the paper out of my mouth.

Sunday I hung around the house and worked on lots of little projects that needed to be done.  I rewired the lights in the camper shell of my truck, all of which have been broken for over a year.  In the afternoon I mowed the lawn, for probably the first time since June.

Monday I took Savannah to work with me for a bit.  We went to the Jade Orchid, where Wanaree gave Savannah a lesson in the woodburning of driftwood.  I brought a nice piece of driftwood that I had picked up earlier in the summer.  The ant colony had left it in the interim, thankfully.  I went back to work to meet with my new advisees.  Lots of tall girls–volleyball, softball, etc.  I went back to pick up Savannah, and we took Wanaree out to lunch.  I thought the grain of the driftwood looked kind of like a dog, but naturally Savannah made it into a cat.  We are all very happy with the outcome.

The bobcat is looking over its left shoulder.  This piece is about three feet tall.