Wednesday I took the Ecology class out to Lowell’s to perform a population analysis of Lepomis macrochirus in order to construct an age-size frequency histogram.  In other words, we went fishing.  We only caught about a dozen bluegills, which wasn’t nearly enough.  Too bad things turned cold; I think that turned the fish off.  The students had a good time, though, and almost every one caught a fish.

Sarah and Angie.  Kasey among the cattails.

Thursday afternoon I went down with a group of QU students to St. Louis to see Body Worlds.  It’s the show at the Science Museum that shows human bodies dissected, poised in various positions and plastinated for permanent perservation.  It’s pretty bizarre stuff.  Sure would like to have one for our anatomy lab.  I think I liked best the pathological organs that I teach in pathophysiology: emphysema lungs, cirrhosis of the liver, enlarged heart.  We all went to an Italian restaurant afterward, with surprisingly strong appetites.  It was actually my colleague Lee’s class.  He rented the van and took care of all the arrangements, while I got to go along for the ride.  Pretty sweet.

Friday I slept in, at least until I had to take Savannah to cheerleading practice.  I dinked around the house and got some errands run.

Saturday morning I went deer hunting out at Lowell’s, or at least I went to sit in a tree.  I saw a deer–crossing the road on the drive out.  As I was approaching the treestand, a couple of turkeys flushed out of the trees.  After I was up and settled, I heard the distinctive snort of a deer on the ridge to the south.  It snorted a few more times and ran off.  A few minutes later I heard a turkey yelping on the same ridge.  I dug out my diaphragm call and yelped back.  I stood up and got ready as the turkey flew down and landed about 20 yards away.  Sadly, it must have spotted me, and ran away pretty quickly.  Another one walked in from the other direction, but it spooked before I even saw it.  I heard plenty of shooting in the neighborhood, presumably from the opening day of waterfowl season and the youth deer season.  I did take a shot at a squirrel.  Scared the heck out of him too.  After I got down from the stand I went to pick up the arrow and spotted a really neat mushroom.  That began the day of mushroom photography, probably because of the recent rain and cool weather. 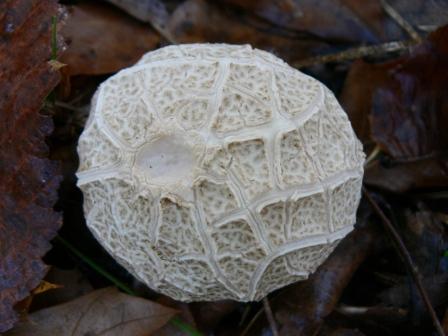 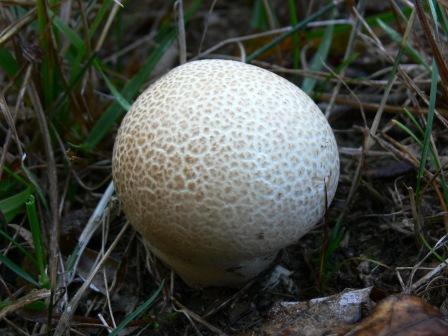 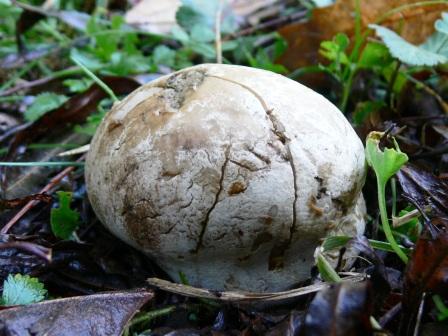 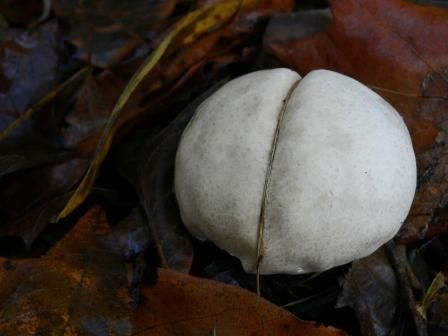 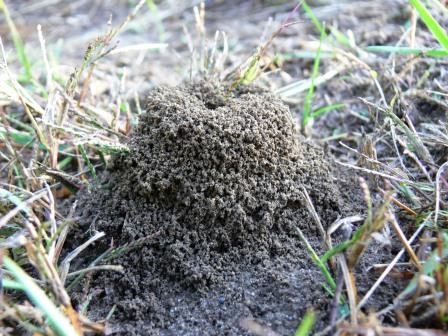 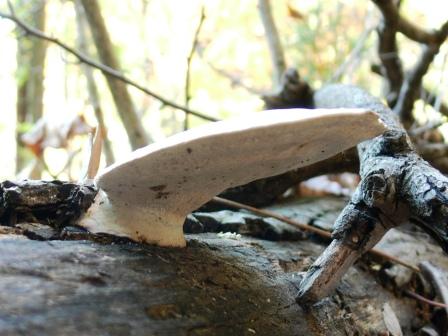 Sunday I took a bike ride, even though the thermometer said 41 F when I left.  I took a slightly different route than usual, encountering some of the worst gravel (more like cobble) I’ve ever ridden on.  I stopped to photograph some moss, but otherwise subjects were few.

Savannah had spent the night with a friend, then spent most of the day with another.  I guess she just doesn’t like her boring old parents anymore.  I stayed home and read a book.  Stacey and I lit a fire in the fireplace, but she had to leave for a real fire.  Someone’s shed burned down, with a whole bunch of ATVs and a tractor within.  Stacey worked the fire even with sutures in her finger.

I got so inspired by the mushroom photos that, you guessed it, I made another calendar!  It lies here:
http://www.cafepress.com/mushroomcalndar

Monday afternoon my BIO I class looked at their regenerated planaria.  One group had made a perfect slice halfway down the center of the worm’s body, resulting in a temporary two-headed worm.  This rarely works, and I haven’t seen it for many years.  I had my camera handy, and took a shot down the ocular of the dissecting microscope. 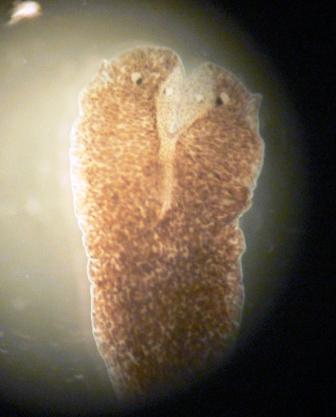 The two heads are touching at the top, and the newly regenerated portions are pale.  Eventually, it will split into two worms.

In the evening I had dinner with Lee at the new Thai place.  Some of their stuff is HOT.  Mine was really good.  Afterward I stopped at KMart and went to teach my Galapagos class.  It was fun, of course, and I showed them how I had packed my stuff and what I planned to take.  It’s hard to keep your head on straight when you’re constantly reminded of something as exciting as this trip.  I’m going crazy.