Tuesday night I finally had a chance to carve my pumpkin.  I had bought a new carving kit, as we seem to have lost our traditional box of Halloween goodies.  I had also found some directions on the web on how to make a carving template from a photograph.  I decided to carve a monarch butterfly, as I’ve been kind of obsessed with them this year (could you tell?).  Most of the image was grey space, which requires scraping the skin off the pumpkin.  The tool for this procedure was the poorest in the kit, so it didn’t go very well.  I had a long cord with a bright, compact fluorescent light on the end, and that did a hell of a job lighting it up, compensating in large part for my limited carving ability. 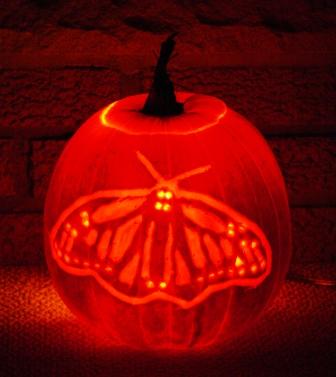 The bulb really lights it up.  I put it out on the porch and you can see it from a mile away.

On Halloween Savannah dressed up as a zombie cheerleader.  She said, “What can I do to be scarier?”  I said, “Tell me you’re pregnant.”  Stacey said, “Take off your make-up.”  She actually went Trick-or-Treating with one friend at a couple of nearby houses.  Some more of her friends came over and watched Nightmare Before Christmas.  Her boyfriend brought over his Guitar Hero video game.  He left it here for awhile, and I am now a shameless addict.  For those who are unfamiliar with this game (all my students play it), you follow along with the TV playing a song and hit buttons on the fretboard and while “strumming” a long bar button.  It’s hard to explain how addictive this game is.  It’s perfect for a middle-aged poser like myself, who never learned to play an actual instrument.

Stacey had a fire call Friday morning.  A minivan caught on fire at the gas station, which had a lot of potential for disaster, but one of the firefighters living nearby put it out with a little fire extingusher before the truck got there.  Savannah had the day off from school.  First we went to parent-teacher conferences, which I haven’t done for years.  Her teachers said she is smart, well-behaved, and hard working.  I said, “Are you sure we’re talking about the same kid?”  I didn’t get a very satisfactory explanation from the Ag teacher about why they’ve done nothing so far but study FFA.  We went to Quincy, got an early lunch at McD’s, stopped at Merkel’s to get some “cheerleader bloomers,” and went to QU’s main campus.  Even though I’m a senior (4th year there), I’ve never used the recreation center.  We went to the pool, where I tested all my snorkeling gear.  Everything worked great.  I can really haul with the new swim fins.  Savannah did some laps, and tried out the mask and snorkel.  I went to a meeting while Savannah played video games on my computer and ate whatever food I had lying about.

Saturday I went out to Lowell’s for some quail hunting.  It was really Kane’s day out.  He’s 14 now, and I don’t know if he has another season left in him.  He got to run around, and go swimming twice.  After we went out to lunch we brought him a can of Alpo.  We never saw any quail, but we got a good walking workout.   We did some small-scale logging, chopping down some leftover stumps and limbing out some trees we forgot to drag out.  There are some dead oaks that blew down that we’ll get to eventually.  The new cab came for Lowell’s Mule, so we installed it.  After that I had Lowell call me over and over until I found my phone lying in the woods next to a tree I had been chainsawing earlier.  Kane was no help in this–he walked right past it.  He paid for his day of fun though.  When I let himin that night he was mighty stiff and sore.

That night we dropped off Savannah and Dustin at about 5:30 to get ready for the play.  We went to the local diner for dinner.  It was pretty busy, but we got a table without difficulty.  After drinks, salads, and about an hour, our dinner was nowhere in sight.  The waitress said it would be another 20 minutes, so we left to see the play.  Dustin had a lead role, which he played very well.  Savannah played a dumb school girl, which I thought was typecasting, but she did an excellent job.  Overall, the play was extremely well done, and several notches above the performances of years past.  I guess that’s why they had play practice every day for two months.  Afterward, Stacey and I went to have dinner, again, at a different place.  Pizza.  Savannah went to Pizza Hut for the cast party, and ended up spending the night with a friend.

I had ideas about a bike ride Sunday morning, but I was about as sore as Kane.  Saturday’s hunting and logging were enough of a workout for me.  We had a small celebration of Savannah’s 16th birthday.  She opened all her presents and we had cake and ice cream and sang Happy Birthday.   I revealed to her, finally, that, after all these years, I was, in fact, the Tooth Fairy.  I even showed her the collection of her baby teeth I still have.

Monday I had to meet with our liaison to the State Board of Education and go over a program report I had written last spring.  I saw the English Department’s report in the morning, and it was about 5 times longer than mine.  I thought I had a lot of work left to do.  I arrived at the meeting and they were going over the English report with a fine-toothed comb.  Oh, boy.  Then it was my turn.  They asked what department I was from.  I said biology.  They said, “Oh, yours is good.  You’re done.”  Whew!