Thursday afternoon I was a judge for the QU Academic Challenge–a quiz bowl for high school students.  It will be televised around Christmas.  I wore a tie for the whole 5 seconds I’ll probably be on the air.  There wasn’t too much eventful, except that some teams were MUCH better than others.  The moderator was Brian Inman, our local TV weather man.  I talked to him for a bit.  Turns out he’s a real nice guy.

Friday morning I went out to Lowell’s to get my last licks in on the deer hunting before the gun season starts.  I sat in my favorite tree, but saw no deer, or anything else I could shoot at.  I wanted to stay out awhile longer, but I had underestimated the cold.  I climbed down and stalked around the place.  Still nothing.  I warmed up in Lowell’s house, and we went to lunch at the new Mexican place in Ewing.  It was good, and a lot of food.  We spotted a cat that’s been hanging around. I sneaked around the shed to get a picture of it.  It was kind of dirty.   Turns out it was quite tame, and I petted it a bit (NO, I DON’T NEED ANOTHER CAT AT HOME).  When we left, it was rolling in the dust on a trail.  Now we know why it’s so dirty.  Made me think of a song I know. 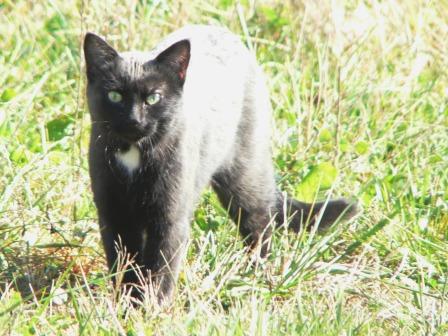 “Kitty at my foot and I want to touch it.”
–The Presidents of the United States


We fished for catfish out of the floating dock.  Lowell got some big bites right away, but couldn’t hook them.  This is typical for these catfish.  I missed one, then hooked another one of good size.  It fought a bit, jumping in the air and doing a complete 360, but the cold was too much.  Lowell netted it and photographed me with it.  I released it.  We got a few more bites (they love smoky links), but things slowed down.  We moved up to the catfish pond, where I immediately caught another small channel cat.

Second cat of the day.  We didn’t eat this one either.

After I turned it loose and baited up again, my camera fell out of my coat pocket, tumbled down the bank and into about 4 inches of water.  I pulled it out quickly, rinsed some of the mud off, and wiped it dry with a rag.  It powered up when I tried it.  I figured it would be OK after air drying.  On the way home I stopped to photograph a hawk, but it wouldn’t power up.  At home I found that I could shake water out of it.  Bad sign.  I shook out as much as I could, but noticed water inside the lens.  Very bad sign.  The pics on the memory card were still good, as you can see above.

I let Kane out to run around while I covered our fish pond with netting to keep the leaves out.  He started rolling in something down by the little sweetgum tree.  It turned out to be a dead garter snake, probably killed by the neighbor’s mower.  Looked about the size of the one that used to live in the rocks around our fish pond.  Sad.  I went down and pulled some logs out of the brush dump after that.

Saturday I went to the Kibbe Field Station for the 40th Anniversary celebration.  I saw some of my old friends, Rick and Mike, and caught up on news.  Found out my old buddy Tom Dunstan had a heart attack last week.  He gets this blog, so, Tom, take a look at that catfish if you want to keep your blood pumping!  For those of you who don’t know, Tom’s son Marcus cowrote the script for Saw IV, which just made about a bazillion dollars at the box office.  I expect to see a new Lund in the driveway soon, Tom.

Sunday I stayed home in the morning and rode the exercise bike for an hour while watching a movie.  It has to be a really good movie to distract from the pain and tedium of pedaling.  The camera appears to be dried out, but there’s some remaining crud inside the lens.  I took a photo of a clean piece of paper and the spots do show up.  I dread sending it in for repair and being “soaked” again.  In the afternoon I took Savannah and Dustin to Quincy to the rehearsal for the Christmas piano recital.  At least I sat by some friends there and had some friendly conversation. We hit WalMart afterward and got Burger King on the way home.
Monday was fairly uneventful, except that a woman brought me a snake for identification.  It was another black rat snake, apparently a hatchling.  My student assistants and I handled it, and it bit every one of us.  Fortunately, it’s too small to cause much damage.  I will probably give it to another student.