Thursday morning I asked my freshman Bio II class how many would like to take the Galapagos class, and 17 signed up, even though they knew the cost.  Looks like I’ll be going again.

In the afternoon I gave a presentation on butterflies to POLIS.  I’ve never done this one, but it went over really well.  My favorite part is when I show them about 8 images of the monarch butterfly, teach them male from female, then ask them to sex the next one.  And it’s a viceroy.  I never get to use trick questions in my regular classes.  Later I went to our women’s basketball game.  I missed the end because I had to go to our pizza party for the Galapagos class.  We won anyway.  The party was fun, though I do see most of them at various times during an average week.  Afterward I went back for the last half of the men’s basketball game, which was close all the way, but we won in the end.  My students played really well.

Friday I had to go in for a couple of meetings.  The first was rather uneventful, except when I described my Program Showcase for the upcoming accreditation visit.  I have lots of pictures of my students doing things in the outdoors.  I put them on a poster with minimal text.  My theme is “No Child Left Inside.”  That got a few laughs.  Stacey and I went to lunch, as she was in Quincy for meetings too.  Afterward I went to my office for a bit, met a student, signed some papers, and went back to main campus for another meeting.  We revised our biology curriculum somewhat.  I went to another office and printed off my poster.  They just got a large-format printer that can print 24 inches wide and as long as you want.  I also had him print a couple of my panoramas from Ecuador that I had conveniently formatted ahead of time.  It’s a slow process because it takes 5 minutes for the ink to dry.  They look great on that glossy paper though.

Oh, get this.  On the Culver-Stockton web site’s page on the Science Fair, they have a picture of me.  That’s really ironic since they fired me four years ago!

Saturday at about 5:30 a.m. the pager went off.  Stacey went to a house fire and was gone for hours.  I stopped by to deliver some juice and a dolly while I was running errands.  I ran out to Lowell’s for a load of wood.  The snow geese were migrating.  We must have seen a few thousand.  In the afternoon I went to our QU basketball games.  Against the odds, we won both.  They were riveting games.  I spent much of the evening mounting a print.

Sunday morning I worked on the Tracker.  I’m not much for body work, but I got the thing drivable and working again.  I did some work on the dune buggy too.  While test driving the Tracker, I watched for targets of opportunity. 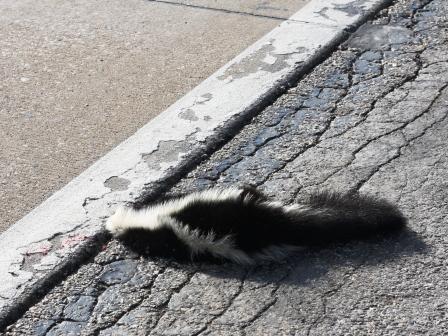 Ducks are migrating along the river.  These were going in the wrong direction.  “Dead skunk on the side of the road” just doesn’t sound as good.  Loudon Wainwright III had it right.

Savannah had another incident on the way back from driving Dustin home on Sunday night.  The victim: a large raccoon.  Too bad I wasn’t there to see that.  It wasn’t her first roadkill (she hit a squirrel before), but she was a bit traumatized.  At least she remembered not to swerve.