Tuesday I took my class to Quincy Recycle Paper.  It’s a fascinating place.  They actually package and resell all kinds of stuff, not just paper.  I love the straight talk.  The guy said you don’t have to take the labels and caps off of plastic bottles and rinse them out.  None of that matters.  They had bales of shredded Harry Potter books and all kinds of plastics and cans.  It rained almost all day.

Wednesday was a much better day weather wise.  I took my class to Sunset Park, where we saw a couple of new trees and practiced our plant photography technique some more.

Sunset Park provides a great western view of Quinsippi Island.  Someday I need to stop there during an actual sunset. 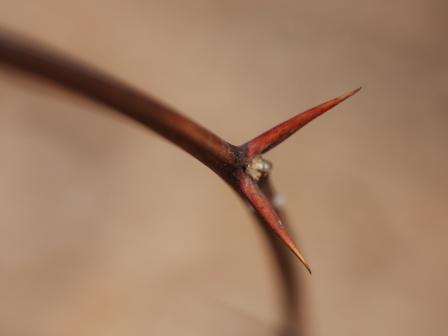 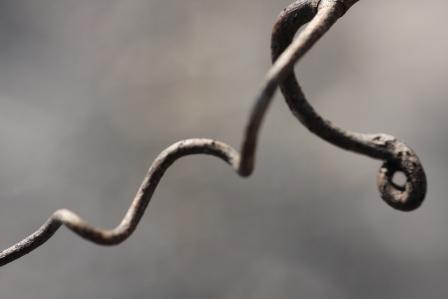 No flowers are out yet, so tendrils and thorns provide us with some opportunities for artsy shots.

Brent took this one in the lab before we left.  Elizabeth has ten horses and, I would say, a devilish grin.

I had a quick, late meeting at the School of Education.  We were reaccredited.  All the work was worth it (although I admit many others worked much harder than I).  Strangely, someone stole some of our files from the evidence room, which made things difficult during the visit.   I know no details yet.  I’m lizard-sitting for a couple of my students.  Their bearded dragon “Bob” is like their baby.  He’s living in my lab over spring break.

Thursday I went to Lowell’s.  We started with some vigorous chainsawing, cutting up some logs we had dragged out last fall.  We also cut up a large branch from a hickory that had fallen in the neighbor’s pasture.  After the hauling and stacking, we planted some gooseberry bushes and loaded the truck with seasoned wood.  A hearty lunch in Ewing was followed by the first fishing outing of the year–for me anyway.  The fish were not exactly cooperative, but I did land the first bass of the year. 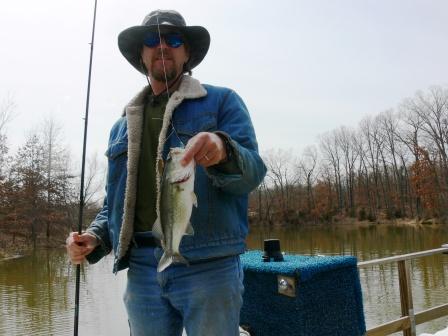 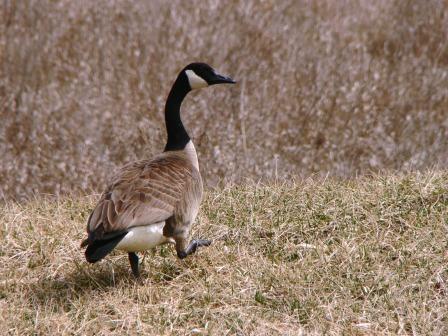 Goose-stepping!  The resident pair have established themselves on Lake Lowell. 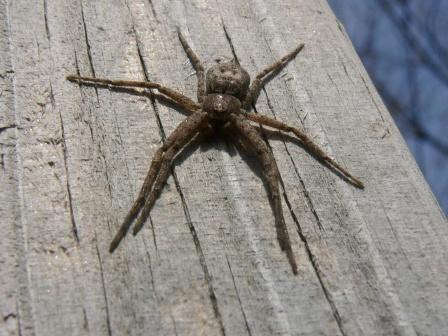 Not many insects are out yet, but this spider was chilling on Lowell’s dock.

Speaking of signs of spring, I saw the first turkey vulture on the first day of spring.  American white pelicans are moving upriver, but not many are hanging around.  Grackles are here, and our silver maple has broken its buds.

Friday was spring cleaning day.  Stacey, Savannah and I worked on the upstairs for most of the morning.  We don’t have a housekeeper anymore, and things back up.  After lunch Savannah and I unloaded the wood from the truck.  I worked on the dune buggy for a while.  I drained the gas and put in two gallons of precious premium.  It still doesn’t run right, but it’s going up for sale anyway.  Next I only have to clean it up and photograph it.  I have prepared a web page to market it.  Stay tuned.

I downloaded an icon-making program.  It’s fun, but I haven’t done much with it.  Here’s a 16 x 16 pixel icon I made illustrating our family cattle brand.

It’s small but not a bad representation.  Now that I look at it again, I think I got the direction of the spikes reversed.  Dang!

Saturday we all went to Quincy.  We got a prom dress for Savannah, crickets for the lizards, a new wireless router, groceries, and probably a lot more.  We ran into people we knew everywhere we went.  Fortunately, my former student Paula had a coupon that saved us a bunch on the prom dress.  We stopped to get Savannah’s phone fixed and one of my friends from book club was the technician.  He did what he could, but it has to be sent in.  When we got home I took a nap and hooked up the new router.  I let Savannah cut my hair and I shaved off my goatee.  Spring cleaning for my head!  We opened our Easter baskets that night because Stacey was going to be gone in the morning.  All were pleased with their goodies. 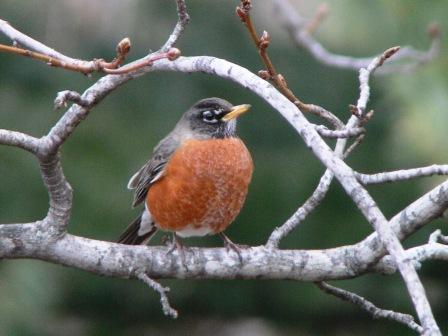 Easter.  I remember in my youth so many years we’d go up to Grandpa’s cabin in the mountains for our traditional Easter egg hunt in the warm California sunshine.  This morning we got up to quite a different greeting: snow.  Stacey had a sunrise service at her church to give.  I was reading the paper when Savannah got out of bed, walked into the kitchen, looked out the window and said, “Are you kidding me right now?”, as snowflakes steadily fell and covered the ground.  We played some Guitar Hero that morning.  She almost always beats me when we play in Face-off mode.  In the afternoon we were working on getting some stuff listed on eBay when she noticed Kane running around in the back yard.  He had pulled on the chainlink fence of his kennel and made a hole he could fit through.  That explained last week’s mystery, when he had gotten out with similar damage to the panels.  I decided emergency repairs were necessary or he was going to keep tearing up his corral.  We dressed warmly and headed out with a roll of thick wire and several pairs of hefty pliers.  As soon as we got out there, it began to snow big pellets of heavy stuff.  I had to go back for a better hat, and Savannah had to get more layers.  We reinforced the bottom of each panel, wiring the chainlink to the pipe at frequent intervals.  I’m not sure how he was doing it, perhaps with his teeth, but it will be a more difficult trick now.  The pellets changed to big snow flakes that covered everything.  Later it warmed up and it all melted off.  Easter surprise!

Monday I pulled out the dune buggy.  Savannah and I washed it and scrubbed the bugs off.  I vacuumed it out and photographed it from every possible angle.  I made a web site to facilitate the sale.  It’s here:
http://www.showmejoe.com/buggy/buggy.htm

I’ve posted an ad in a couple of the obvious buggy sites.  More may follow.