I’ll be submitting this to Paddling.net soon.
————————————————————
A canal may not be the most wild and natural place to paddle, but it still makes for an interesting afternoon.  Fenway Landing Conservation Area is a state-owned site on the Mississippi River in Lewis County, Missouri.  Primarily, it provides a launch ramp for boats to easily access Pool 20.  However, on the gravel road to the river is a prominent pump station that takes water from levee district to the north and pumps it into a canal that runs south to Canton, meeting the Mississippi River just below Lock and Dam 20.  I’d lived here almost ten years, and fished both ends of the canal, but never explored it further.  I bribed my daughter into shuttling me and the kayak to the put in, where the water comes out of some large culverts running under the road.

Here is where I saw the strangest phenomenon of the entire trip.  Thousands of fish were aggregating at the headwaters.  They appeared to be carp about 3-4 inches long.  They were schooling, jumping, making the water boil, and apparently trying to swim farther upstream.

The “headwaters” of the canal. 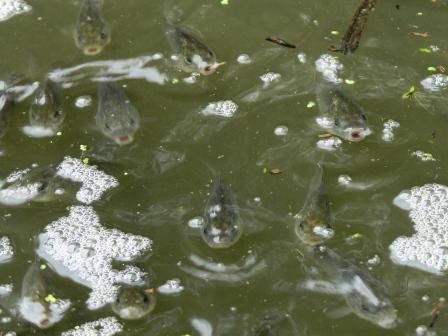 The first section is tree-lined, and looks tropical with all its viny overgrowth.

In other sections I was almost level with the surrounding fields.

I disturbed this vulture during its dinner.  I’m betting it was fish.

This straight section seems like it will go on forever.  It will if you don’t work at it.  The current here is negligible, making this a paddle, not a float.

I was trying to illustrate how the flood killed these young oak trees, but I liked the way the clouds and reflections turned out.

I attempted some fishing.  There were lots of carp jumping and gar splashing, but no sport fish went after my jigs and spinners.  I also explored some creepy overgrown side channels, small creeks that drain the surrounding fields.  I knew I had plenty of time to burn.

When I got near the end of the canal, I stopped at this fence where I lost a couple of lures a few weeks previously while I was fishing for white bass.  That’s my double curlytail white grub at the lower left.

As I approached to retrieve the lure, however, I noticed that it had a fat, sinuous guardian.  Fortunately, she left and I picked up the lure (lower right).

At this point I turned right and headed up the ditch that routes Dead Dog Creek around the levee.  The water is seldom high enough to do this.  I could have gone farther than Route B, but I turned around there after crossing underneath.  It has three culverts.

Would you like Door Number One, Door Number Two, or Door Number Three?  I took One going out and Two coming back.  Apparently, all the mosquitoes in Canton spend the daytime in that tube. 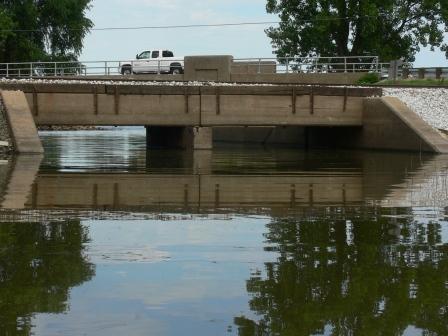 I forgot to mention that to get into Dead Dog Creek I crossed this railroad bridge.

I had to do the kayak limbo to get under it. 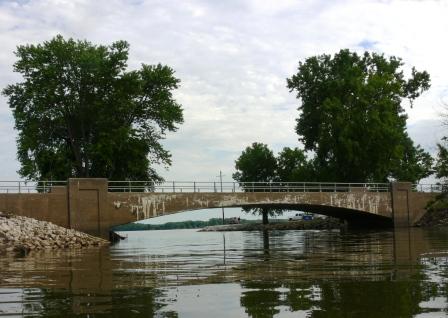 The bridge to the lock house marks the near end of the trip.  I yelled a few times when I was under its arching span, as it produces a tremendous echo.  It’s only a few hundred yards to the launch ramp near the ferry at Canton.  This stretch is on Pool 21 of the Mississippi, right below the lock and dam.  There’s at least some current there.  This trip takes about 2.5 hours, depending on how much you explore or fish, and spans about 5 miles.  The canal was about 7 feet deep along most of its length, according to my little hand-held depth meter, but then they were pumping a lot of water and the river was high.  The river stage was at 12 feet on this day (available here: www.crh.noaa.gov/ahps2/hydrograph.php?wfo=lsx&gage=canm7&view=1,1,1,1,1,1,1,1).    It’s often between 2 and 3 at this time of year.  Hence, it might be difficult or impossible to make this trip when the river is low.