I finally got around to editing the video of how I fillet a fish.  I’d been meaning to do it since last fall, when I wanted to teach some of my students.  I recorded myself filleting about 6 fish, and used the best of them.  I made some slides in Powerpoint for text, and added the narration in a video editing application.  I hate narrating, as I am awful at it.  The end product was not as good as I would have liked, but I didn’t want to spend any more time on it.  I am not a video production company!
I will embed the video here.  If it doesn’t show up, you can click on the link, which will take you to the video on YouTube.

Tuesday afternoon I was interviewed by our NPR station on campus, WQUB.  It was actually a lot of fun.  He asked me questions that I could really sink my teeth into.  It was mostly a preview of my talk on Darwin’s Galapagos for Thursday night.  On the way home the sun was shining and there were more swans on the sand pit than I have ever seen.  I was kicking myself for leaving my camera at home.  I spliced the severed power cord in the back yard, and secured the plastic sheet on the south firewood rack.  We’re supposed to get high winds tonight.  I went to the Canton Camera Club meeting in the evening.  It was fun.  We have just a few hardcore members.  I showed some Galapagos pictures.  Another guy is a master of Photoshop.  He showed us some collages, and how to do High Dynamic Range by combining images.  Cool stuff.

Wednesday it was raining when I left the house.  It had stopped when I got to Quincy, and when I checked the radar online, it looked like we would have a couple of hours without rain.  So I took the class out on our weekly field trip. I rained on us most of the time.  We still saw some neat birds, like white-throated sparrows and common goldeneye.  They didn’t complain much either.  Tough group.

Thursday I wore my Charles Darwin shirt, the one from the Galapagos with the signatures and sayings of all the students who went along.  It was Darwin’s 200th birthday.  I gave a talk on “Darwin’s Galapagos” that night.  It was part our QU’s Town and Gown series.  I hadn’t given one for a long time, since there were only about 3 people at the last one.  This time it was more like 20.  Some of them I knew, but many I didn’t.  The talk was well received.  I showed a lot of pictures, and fielded a lot of good questions at the end.  The timing came out about right too.  I had changed into a button-down shirt and a tie, as the Darwin shirt had too many naughty words on it for a general audience.

Friday I did a bit of work outside, but mostly hung around the house and did little jobs like balance the checkbook.  Saturday afternoon Lowell and I went to the QU basketball games.  They were the best ever.  In the women’s game we started off cold and got way behind.  But we battled back in the second half to win by 12.  At half time of the men’s game, all the ladies on the team went out onto the court and had 8 inches of their hair cut to make wigs for cancer patients.  They were having a big cancer awareness thing.  Even the men were wearing pink T shirts.  Then during a time out, the women’s coach had three of the ladies guess how many inches of hair were cut.  The winner received a rose–and a proposal from her boyfriend in front of the entire crowd.  It was quite a deal.

The men had lost by 20 points the last time thay played this team, which features a legitimate NBA prospect and another guy who’s 3rd in the nation in field goal percentage.  I was expecting us to get stomped, but we kept it close.  We even led by a point or two, right up to the end when we actuall won by one point.  That was a total shock.  I think their players were more skilled individually, but we played more like a team.

Sunday I mostly lounged about.  In the afternoon Stacey and I went out to the state park and did a 2-mile hike.  It was a bit muddy, and there wasn’t much wildlife moving, but we enjoyed each other’s company.  On the way back we stopped at Farm and Home to see Savannah.  She was working, and had called us earlier.  It was nothing urgent.  Someone had returned a Carhartt-like jacket, covered with dog hair, and she got a really good deal on it.  Since Carhartts were on clearance, I got a jacket myself.

Monday I went out to Lowell’s.  Right before I got to his house, I stopped on the side of the road because there was a big hawk on a power pole.  I took the lens cap off, turned the camera on, stuck it out the window, and the hawk flew off.  Dang!  I thought it was probably evolved adaptive behavior.  Probably for many years, hawks that didn’t leave when vehicles stopping and pointed things out the window left no offspring with their incautious genes.  Lowell and I had a vigorous morning of chainsawing and stacking wood.  We haven’t done it for a long time.  More oak trees had died from the oak wilt disease.  Some were already down, but others I had to fell.  I’m kind of out of practice on that, and the majority did not fall where I wanted them to.  At one point Lowell had to move the Mule to avoid a potential accident.  We went to lunch at the Ewing diner, which was tasty.  When we returned there was a big red-tailed hawk on the raptor perch.  I ran to the car to photograph it.  I took out the camera sneaked around the edge of the shed, and it was gone.  It’s just not my lucky day!

It was the Great Backyard Bird Count this weekend.  Sunday I had pretty good species diversity.  Here are some of the more routine visitors.  I’d rather have gotten a decent shot of the brown creeper. 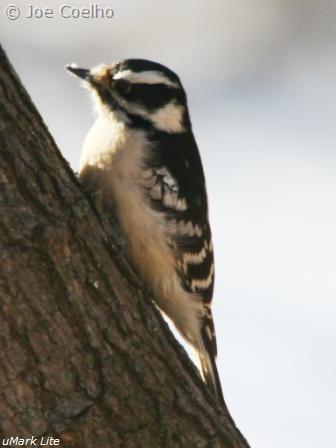