Tuesday evening I went to Savannah’s soccer game.  It was against a team that had skunked us 10-0 last time.  But we held them off for awhile.  They still scored and led 5-0 at the half.  We didn’t fold, and got some chances.  About midway through the second half we got the ball downfield with advantageous numbers.  It was a little crowded in front of the goal and hard to see, but the ball bounced around some players and one of ours knocked it in.  Goal!  Our girls were all screaming and I was doing a dance on the sideline and yelling like an idiot.  It was the first goal our team had made all season.  They had a celebratory dinner out afterward, though we lost 6-1. 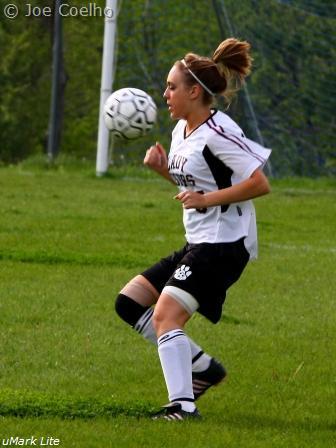 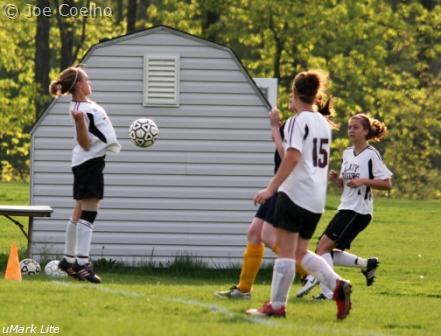 Savannah chests the ball–for the first time ever.

Wednesday was the last field trip for vertebrate field biology.  We took a quiz then went to Quinsippi Island.  We saw a lot of turtles and many birds, a few new to the class.  I noticed I had gotten 435 miles out of my tank of gas when I got home.  When I filled up and did the calculation, I found I had gotten 47.7 mpg, a record for the egg.  Most of that was with two scuba tanks and a full gear bag in the trunk.  Must have had a heck of a tail wind.

Thursday I took the Bio II class out for a final walk.  We crossed the creek, and many got wet feet.  It is amazing the range of abilities and attitudes in that group.  In the afternoon I ran out to Lowell’s.  We did a couple of rounds of the lake, while it alternately rained and shined.  I caught 3 small bass and a crappie.  Lowell caught a couple of small bass and a huge bluegill.  I hiked around awhile looking for morels, but didn’t turn up any.  I did find some wildflowers, and a most unusual bird. 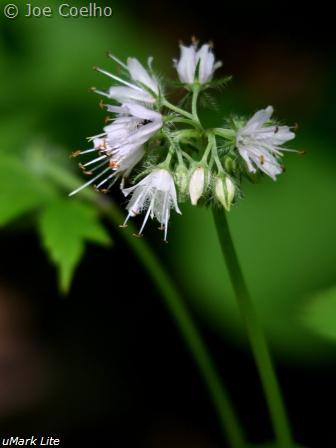 This stuff is blooming out by North Campus.  I think it’s Woolen Breeches. 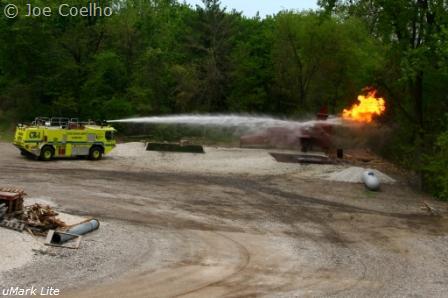 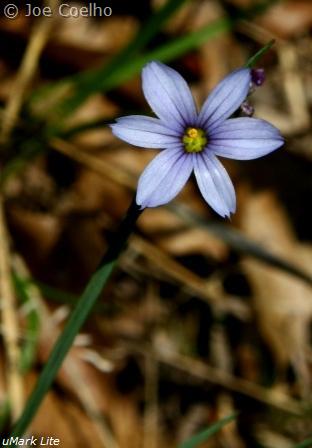 Blue-eyed grass–or what it looks like when the flowers open. 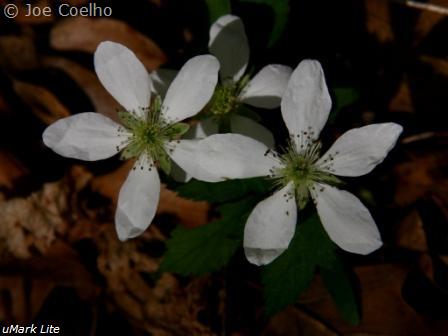 Dewberry, another new one for me. 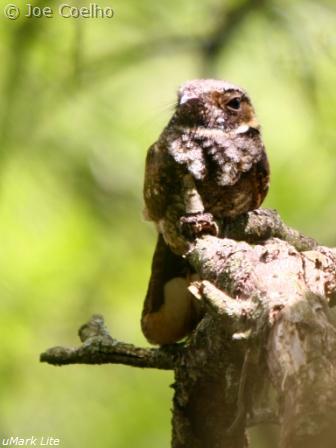 This Whip-Poor-Will flew up from the ground and landed on a nearby branch.  It let me change lenses, but not approach any closer.  I never expected to get a picture of this species in my life. 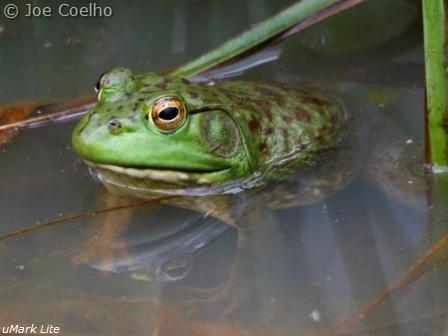 A green frog in the little cattail pond.

That evening while I was preparing to get a hair cut from Savannah, we got a tornado warning.  I thought it best to put off the haircut rather than get halfway done and have to stop.  Some really scary clouds came over, and we had a brief period of torrential rain, but no tornado, fortunately.  The sirens went off and everything.  I really thought we could be getting one.  Again.  So afterward I had Savannah cut my hair. 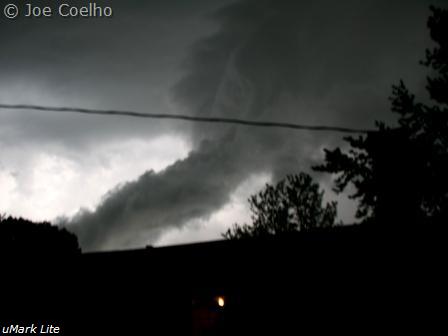 Looking over the top of our house.  Savannah says this cloud was rotating, but I didn’t see that. 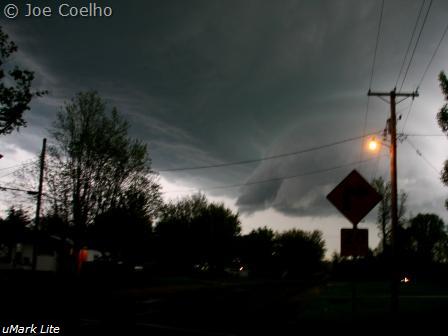 Taken from our driveway, this formation looked more ominous.

Friday I went in to the office, got some work done, then to a lunch meeting.  I went to Hannibal and gave the Spring Wildflowers talk at Stacey’s Mothers’ Day Tea.  It seemed to go over well.  We went to Quincy to see the opening of Star Trek.  I thought it was really good.  We got a bite afterward and did a bit of grocery shopping.  Savannah was at a soccer game in Kirksville.  Apparently, she nearly scored a goal.  As usual, our team scored no goals.  Her soccer buddy Hannah spent the night.

Saturday I got up early and went to meet Leo for the Spring Bird Count.  We were assigned a choice location: Fall Creek.  We started at the base of the overlook and walked a trail that I didn’t know existed.  Right away there were lots of great birds.  It’s also a super spot for wildflowers.  We drove up to the overlook and walked around.  Out on the overlook trail we found a couple of large trees that seemed like bird magnets.  There we saw the American Redstart, Scarlet Tanager, and several others.  The Tanager was a life bird for me.  We also walked down by the creek and saw two more tanagers and the Nashville Warbler.  After that we mostly drove around the perimeter of our area, which took the rest of the morning.  We ended up with 57 species.  By comparison, the best my class did this semester was 27 species.  Clearly, the class ends too soon.  The semester needs to go another two weeks to catch the warbler migration.  The tanager and the Bobolink were new species for me, and the Dickcissel and Orchard Oriole were new ones for Leo.  That’s a pretty good day. 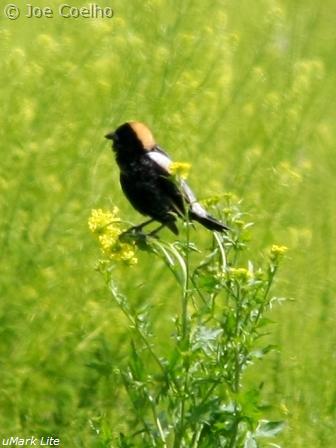 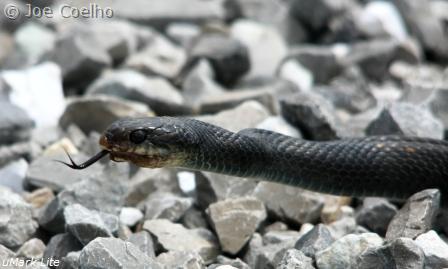 We saw two blue racers crossing the road.  This one needs to stay off it–his head’s been mangled once already.

When I got home I wanted to see if there was a white bass run on so I loaded up my rods and tackle box.  I tried the usual spots down on the river.  At the launch ramp area there sere a few minnows jumping, and I actually hooked a small white bass.  It was obviously not the time for a great run yet.

Ron sent me an oriole feeder.  I set up that and the hummingbird feeder in the back yard.  I got hummers right away, but I know it will take awhile before the orioles get interested.

Sunday morning I went out in the back yard to begin my day of yard work.  I found that someone had completely mown down my spring wildflower garden, as well as a big chunk of my prairie.  I was absolutely incensed.  I’ve been bringing these along for years, increasing their size and diversity, investing time and money.  The irony is that I had the prairie fenced off until recently, when I figured it was too big for the bunnies to do it much damage.  I didn’t expect idiots with mowers.  Turns out it was the landscapers the neighbor hired.  She told them where the boundary was, and they went way over it.  Did they fail to notice the cactus they chopped up?  Or the plastic sheet torn to bits?  Tomorrow, the landscaper gets an earful, and a bill.

So that got the day off to a poor start.  I took the truck down to the brush dump and picked up a few logs.  Most of what was there was too small or too rotten to be worth picking up.  I ran into a friend though, and the conversation lightened my mood.  I unloaded that stuff and cut up the neighbor’s pine for more wood.  I ran into Nancy, so after lunch I dug up some of her coneflowers for the QU prairie and cut down and chopped up some of her problem trees with the chainsaw.

Monday I gave my first final and did a lot of grading.  Savannah called me while I was driving home to tell me there was an oriole at the feeder.  Success!  I stopped at the landscaper and told him his guys had mown down my flowers.  We worked out how his guys had misunderstood the property boundaries. 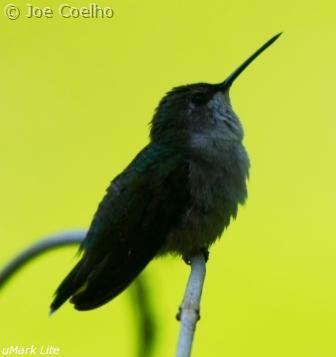 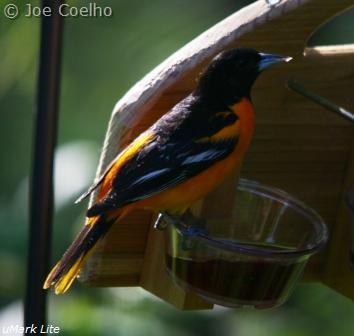 I think this hummer is the territory owner.   This oriole likes Ron’s feeder and Stacey’s grape jelly.

Savannah and I were bored after dinner so we went down to the river.  I brought a fishing rod and tried some of the usual spots.  I actually caught the world’s smallest white bass, but there was not much action to be had.